On Christmas Eve night, as I prepared to play the last hymn of the last service, I began to feel warm.
I might have mistaken it for joyful fulfillment of an anticipated arrival, but that dry, scratchy feeling at the back of my throat indicated a respiratory cold.  And this one was bad.  A debilitating one.
I spent the first days of Christmas in bed or growling at in-laws and Don in Cleveland where we had gone to spend the holidays with family.
On the third day of Christmas, I arrived home where my nose stopped running, and within another day I was well enough to exercise and see friends.
I spent my Thursday morning visiting with friends from high school.  Dr. Stacy and Mike Ogden.
I’m not sure whether it was my feverish brain (remember cold-recovery mode) or Stacy’s conversation at lunch about Marie Kondo’s book The Life-Changing Magic of Tidying Up or the sun aslant in a post-solstice sky, but as I approached the back door to our home, my eyes beheld the abandoned cylinder of twigs that has rested on the sage-green ledge above the transom window of our back door where Don had chalked the “20+C+M+B+14” during the epiphany season when David Meredith encouraged the congregation to place this blessing above our doors.
***

Two Springs ago, when Yertle the “Turtle Dove” (I still think Yertle is a common pigeon, Don prefers to imagine something more lovely) was speculating real estate above the back door, Don and I argued against nature and each other: demonstrative shooing, worrying over possible animosity between the bird and our two cats, and multiple attempts at eviction.

Perhaps our new avian friend had found the ledge or the letters a comfort.  Yertle constructed her home just above our blessing: “20+C+M+B+14.” 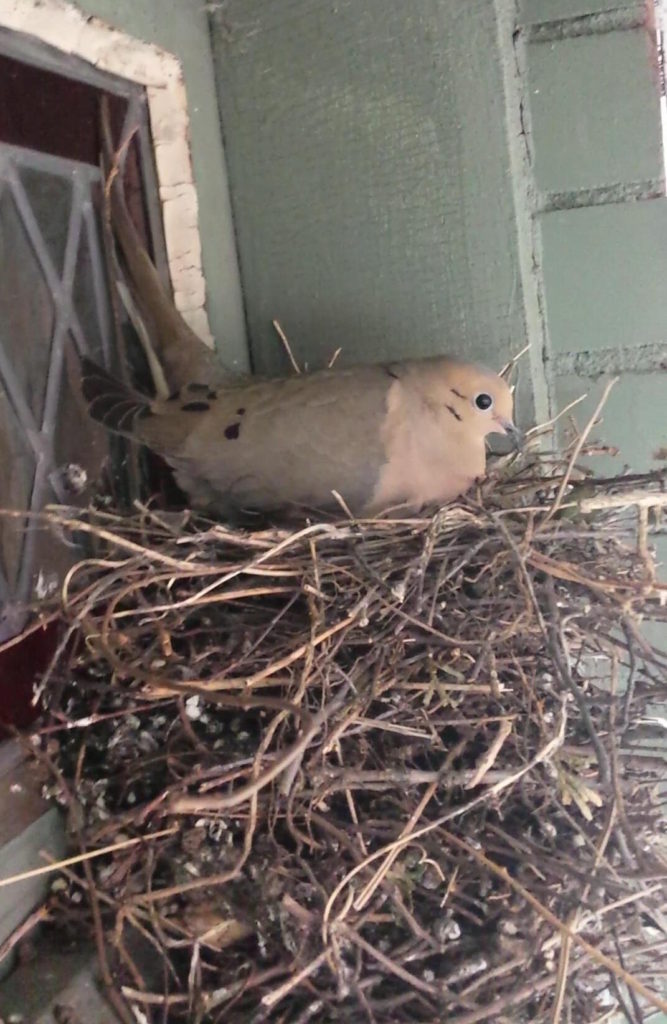 She added a wild surprise to our peaceable urban kingdom.  And we left her alone to hatch her chicks and train them in the ways of her kind.
If you’ve visited our house or listened to us bicker, you’ve probably heard about or seen what we affectionately term “The Bird Bordello.”  During the springs and summers of the past two years, Don and I have been equal parts bemused and gobsmacked as we have witnessed Yertle’s productivity:  Ertle, Pertle, Dertle, Fertle, Kertle, Jertle, Vertle, Mertle, and then we lost track.
***
As I approached the back door and saw Yertle’s now-abandoned nest. I was reminded that Don and I had recently discussed clearing the transom.  Over two years, our prolific avian guest had built up quite a shack: 10.75 inches (I measured) .
I decided it would be an easy job: to loosen the nest from its moorings above our door and make room for something less birdy.
I will leave the dusty, twiggy details to a future story, the picture above, and your imagination, but it was a bit of a surprise when it finally came down.  A bit of a mess.
Reflecting upon on Yertle and the Christmastide cleansing, I’ve come to several conclusions:
1. Don and I need to re-chalk the blessing to reflect the change of year.
2. The story of birth, life, death, renewal is all about us.  Sometimes, it is in cleaning our own homes, that we can find the mess in the blessing, the blessing in the mess.
3. I am my best when I pay attention.  Especially, to things that seem inconvenient.  This might be true for many of us.
4. When Yertle, her sister, or daughter or cousin needs a place to set up camp in the Spring, she will find a cleaner ledge to start again.
Luke Wiseman